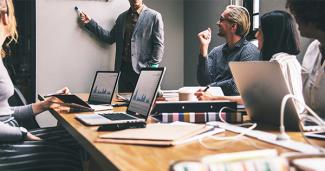 Getting Back to the Basics by Getting the Definitions Right

That man had a way with words. And although Samuel Clemens was known as a notoriously atrocious investor, many of his quips are wonderfully analogous to the world of finance, perhaps none more so than the preceding one.

The essential fundamentals in financial planning are not generally taught in schools. Because of this, folks frequently don’t learn them. They do learn something though, as there’s plenty of “financial information” to go around. Unfortunately, to paraphrase Mr. Twain, the words folks learn and use when talking about their finances are often almost the right word. Then there are other times when the word they’re using doesn’t actually mean what they think it means.

Let’s attack a few. First, a little exercise. If you would, please pull a bill out of your wallet or purse; it doesn’t matter what denomination. Hold it up, and take a good look. Now, I want you to tell me the word that comes to mind to describe that bill. In other words, what are you holding in your hand, in generic terms?

Did you say “money”? You did? Good! That’s what almost everyone says. And that’s your first mistake. Don’t feel bad, it’s everyone’s first mistake.

What you’re holding is not money; it’s currency. Currency is a vital tool in a civilized society. Without it, we’d be trading apples for beef and beef for iPhones. Currency is one of the greatest inventions of all time. But it’s not money.

Imagine now that you took that bill and you stuffed it under your mattress for “safe” (we’ll get to that word in a minute) keeping. You put it there because you didn’t want to use it to invest in something “risky.” It was earmarked for the future, and you couldn’t afford to “lose” it. OK, fast-forward to the future – 23 years into the future to be exact. Let’s assume that the cost of the stuff you want and need to buy has risen at about the same rate as it has over the past 100 years or so, which is about 3% annually. You pull out your bill. It’s still there. Phew. Nothing lost, right?

The definition of money has to be purchasing power, i.e., the ability to buy the stuff you want and need, both now and in the future.

Next word: risk. I’ve seen this defined several ways, but I’ve found the best way to think about risk is the probability that something bad can occur given the action one is taking. I just learned last month during a little father-son camp stay that trying to do a backflip at 45 years old (because another dad did one) off a rope swing into a lake is risky. It turns out that the probability you can break a bone in your face by poorly executing said flip is higher than one may have thought.

Now, this isn’t conventional wisdom’s fault. Even college textbooks conclude the same analysis. I’m sure it’s so intertwined in the lexicon of everyday finance that my compliance department won’t even let me write the next three words.

You see, people and textbooks are using almost the right word. Stocks do exhibit more “something” than bonds, but risk isn’t it.

The word folks should be using for stocks is volatile. Stocks are significantly more volatile than bonds. A word I prefer to use above even volatile (because “volatile” sounds so, well, volatile) is fluctuate. Stocks tend to fluctuate more than bonds on a daily, monthly, quarterly or annual basis.

Nobody will argue that stocks don’t fluctuate more than bonds in the short term. But are they riskier?

Let’s look at some data (don’t worry, not too much data).

Before we get into the numbers, though, let’s tackle a little housekeeping. We’ll again use the S&P 500 as our proxy for stocks, 20-year Treasury bonds for our long-term bonds, and one-month Treasury bills for our short-term bonds. We’ll also look at real returns, as it’s real returns that matter for people. (Example: In 1979, if you owned a CD that paid you 12%, but the cost of the stuff you wanted and needed went up by 13.9% during that time, your nominal return was 12%, but your real return was negative 1.9%. You with me?) Finally, recall that stocks tend to fluctuate more than bonds, especially over shorter periods. The thing to keep in mind, however, is that, in real terms, long-term bonds and short-term bills fluctuate too (and more than everyone thinks).

Here’s the kicker, the climax, the coup de grâce. Let’s look at 20-year periods. (Big caveat: Our Chief Research Officer, Larry Swedroe, and our Chief Investment Officer, Jared Kizer, have both warned me of concluding too much from rolling periods, as the overlapping of said periods is so great that you’re not getting enough varied data for any of it to be statistically significant.)

What about stocks you ask? Great question. The S&P 500 never has had a negative real return at the 20-year horizon. Now, another huge caveat and disclaimer: This does not at all mean that it’s impossible for a negative real return to occur (it has certainly happened in Japan, as Japan’s stock market is still below its all-time high set in 1989), it simply has never happened thus far.

The takeaway is that, if we do indeed define risk as the probability that something bad will occur given a particular course of action (for instance, investing too conservatively to accumulate a nest egg large enough to satisfy the retirement you envision), perhaps bonds are risker than conventional wisdom seems to indicate. And if we define money as purchasing power – as opposed to currency units – perhaps stocks are less risky (in relation to bonds) than conventional wisdom would suggest.

Two of the three worst 10-year periods ever in the U.S. stock market occurred in the past 20 years (1999-2008 and 2000-2009). Everyone remembers the 2008 stock market drop, and for some, it still feels like that scalding hot stove lid. Some of us got caught up in the euphoria of the dot-com craze, experienced the crash of 2000, and swore off ever touching that lid again.

Conversely, 35 of the best 40 10-year periods in bonds have occurred in the past 35 years. Could that be why so many folks feel bonds are so “safe”? I don’t know if many investors today suffered first-hand the pain of getting ravished by their bond portfolio in the 1940s or even the 1970s.

This is a concept known as recency bias, where folks tend to overweight recent, more easily remembered events.

There’s debate over whether Twain ever said, “History doesn’t repeat itself, but it rhymes.” It fits with the theme, however, so I’m going with it.

Getting the definitions right matters: Money is not currency and short-term volatility is not long-term risk (unless you react to short-term volatility in an appropriate way, but that’s a topic for another day). Learn to understand recency bias, and how it might alter your view of the world. Work with your wealth advisor to build the right portfolio for you, with the correct definitions in mind.

Returns data is from Dimensional’s 2019 Matrix book. Past performance is not a guarantee of future results. Indices are not available for direct investment. Their performance does not reflect the expenses associated with the management of an actual portfolio nor do indices represent results of actual trading. Information from sources deemed reliable, but its accuracy cannot be guaranteed.

By clicking on any of the links above, you acknowledge that they are solely for your convenience, and do not necessarily imply any affiliations, sponsorships, endorsements or representations whatsoever by us regarding third-party websites. We are not responsible for the content, availability or privacy policies of these sites, and shall not be responsible or liable for any information, opinions, advice, products or services available on or through them.

The opinions expressed by featured authors are their own and may not accurately reflect those of Buckingham Strategic Wealth®. This article is for general information only and is not intended to serve as specific financial, accounting or tax advice.

As a wealth advisor, Doug Buchan seeks to help clients make smart choices with their money so they can live the life that is most important to them. While Doug knows the science of investing is critical in building portfolios, he also believes no portfolio can be properly assembled without a personalized, comprehensive financial plan.